I’ve just run into an issue while trying to start the ssh-agent in PowerShell Core. The problem displayed was:
unable to start ssh-agent service, error :1058

For my own personal future reference, the problem was that the OpenSSH Authentication Agent service startup type was set to Disabled. The solution was to set the startup type to Automatic.

Once the Services app is open, find the OpenSSH Authentication Agent service and set the startup type to Automatic.

Every once and a while I want to validate the hash of a downloaded file. Most of the time these are MD5 hashes, but I’ve seen SHA as well.

Windows actually has a couple built in ways of generating the hash of a file. You can use certutil or, in powershell you can use get-filehash.

To verify a checksum with certutil use the following command: certutil -hashfile {FILENAME} {ALGORITHM} replace the FILENAME and ALGORITHM with your choices.

This is my preferred method. No reason, maybe I like the order of arguments better?

First things first, I tend to build up a lot of local branches. No, I don’t pro-actively remove them from my machine. (Who does that extremely smart thing? 🙄) At work we use GitHub and Windows. As such I use posh-git to perform almost all my git interactions (you should too cause it’s 👌).

Our current process is:

Any developer can have any number of feature branches out at a time waiting to be merged.  As we are using a “Squash and Merge” process our branches are not *actually merged*. We delete the original branch after the squash.

I continuously search for this, so I’m documenting it here so I NEVER HAVE TO SEARCH EVER AGAIN 😤

First of all, the answer to the question comes from this question on StackOverflow.

If you are in a position where you Squash & Merge then you will need to replace the git branch -d with git branch -D. This will successfully remove all “:gone” branches from your local machine.

If you are using linux, and not powershell, you can use the following command taken from the same question on StackOverflow.

When we push a feature branch live (merge a pull request) we delete the “remote branch on GitHub” (#1 above).

When we run `git fetch origin –prune` we remove the remote tracking branch (taking care of #2) above.

However, taking care of #3 above often requires manual clean up. That’s where the piped command above comes into play, it takes care of cleaning up branch #3.

Last year around this time of year, Microsoft added an Autlolaunch feature to Windows 10. This feature will automatically relaunch certain programs after a Restart or Shutdown of Windows. You’ve likely seen this happen most often with Chrome.

The feature was originally introduced to make Windows Updates feel more seamless, and less invasive. The idea was that, while yes, Windows Updates automatically restart your computer, at least it keeps the windows you had open open! That’s good, right?!

After an extreme amount of backlash from users Microsoft decided to adjust the way the Autolaunch feature worked. This is documented in this thread. You can *disable autolaunch* by disabling the “Use my sign-in info to automatically finish setting my device after an update or restart” setting. You would think Microsoft might make a completely different setting for “Automatically re-launch previously open programs on startup”. But – for now that’s not the case.

Above we have the description of how to turn off autolaunch, below we’ve got a picture of where this setting is.

Enjoy not having Chrome automatically start when you reboot your computer 😊

Chassis.io is an excellent tool to get you quickly setup for WordPress development. Barring any timeout issues, the setup is typically as simple as following their QuickStart guide.

HeidiSQL is my favorite query browser for MySQL and MariaDB databases. I like the layout and the interface is nice and clean.

When you first open HeidiSQL you will see the interface for creating a new Database connection. 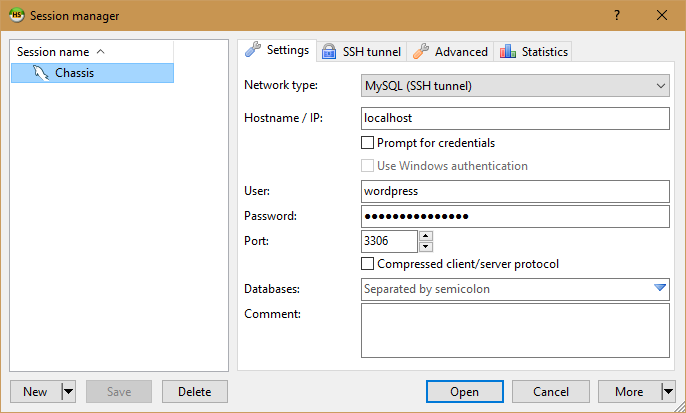 Choose whichever name you want to help you remember what this connection is for. I’ve named mine “Chassis” because it’s my connection to the database Chassis.io setup. You’ll also want to set the following settings:

That’s it for the basic settings. Now for the SSH Tunnel settings.

HeidiSQL uses a utility called “plink.exe” for it’s SSH capabilities. plink.exe is made by the same author who wrote PuTTY (which I’m sure you’ve heard of). If you haven’t got plink.exe downloaded you can find the latest exe on this page. You’ll want to grab both plink.exe and puttygen.exe. I stuck both utilities inside a “PuTTY” folder in my Program Files (x86) directory. You can stick them wherever you want to.

Launch puttygen.exe. This will launch the “PuTTY Key Generator”. Load in the Vagrant provided private key file by using File > Load Private Key. Navigate to the location of your Vagrant private key file. Mine was located in C:\projects\chassis\.vagrant\machines\default\virtualbox. Your location may be different depending on where your Chassis project is. Find the “private_key” file and open that. The PuTTY Key Generator will take care of loading the key in for you. You should see a “Successfully imported foreign key …” message. Now click “Save private key”, choose a name for it, and save it. I just saved it exactly where the other private_key was.

Woot! Now we can fill out the HeidiSQL SSH tunnel settings. Remember where you saved that .ppk file because you’ll need it for this next step.

Alright, let’s plug in the values!

Now we come to the moment of truth. Push the “Save” button on the HeidiSQL session manager to save your changes. Now push the “Open” button and HeidiSQL should connect to your Vagrant hosted WordPress database. Woot!

I’m trying out http://chassis.io as a way to easily setup a WordPress development environment on Windows. It’s actually quite easy and everything works almost exactly like the Chassis Get Started guide describes.

However, I ran into a timeout issue when attempting to boot up the Virtual Machine using vagrant up. On first run the process installed necessary dependencies and wired most things up. However, it hung for a considerable amount of time when booting up the virtual machine. Eventually it told me that it had timed out. It didn’t start the virtual machine.

Hrmm… I wonder why it’s timing out. Chassis.io uses Vagrant and VirtualBox. So I spun up VirtualBox to see if I could manually start the VM myself. As it turns out, I could not. VirtualBox threw up the following error:

I did some searching. I found a number of posts that indicated the solution was to disable Hyper-V. It sounds like this works for a lot of people. Scott Hanselman actually wrote up a post about how to “Switch easily between VirtualBox and Hyper-V with a BCDEdit boot Entry in Windows 8.1“. I tried this approach. It did not work for me (you can remove a bcdEdit entry using bcdedit /delete {ENTRYGUID} btw).

During my search I stumbled upon this SuperUser answer. The answer indicated that, depending on your system, Virtualization could be enabled via the BIOS.

In my case, enabling Virtualization via BIOS involved booting to the UEFI Firmware Settings. I’ve outlined the steps below.

After enabling “Virtualization” I tried to start the VirtualBox VM one more time. BOOM. It worked. I ran vagrant up via a ConEmu console and… success.

Chassis.io is a pretty sweet project. If your system is setup correctly then Chassis.io “just works”. In my case my system needed “Virtualization” enabled via a UEFI Firmware Setting.

Have a stupendous day! 🙂

It’s the little things in life that annoy me. Things like Microsoft’s Edge browser icon re-appearing on my taskbar. Or, when Windows decides to update just before a meeting. I find these kinds of things to be very annoying. That’s why I was a smidgen irked when the Windows 10 Action Center icon popped up on my taskbar and showed no signs of leaving peacefully.

For those of you who do not know what the Action Center Icon in Windows 10 is then allow Leonardo to enlighten you.

And only now, at the end, do you see your mistake.

Now that we are all aware of the horribleness that is this awful Action Center icon we can set off on our quest to destr… err remove it.

**Alternatively, if you are old school and hate things like convenience, you can navigate to this setting section via the Control Panel. So hop on in your Conestoga Wagon and navigate to Control Panel > Appearance and Personalization > Taskbar and Navigation > Turn system icons on or off.

I use the GIT command line interface a lot. It helps me keep my Git repositories looking sharp and clean. Interactive rebase auto-squashing with posh-git+ConEmu ftw!

However, from time to time I will notice that the GIT cli is asking me for my SSH RSA passphrase more often than I’d like. Sometimes it even asks on every pull. That’s annoying.

It is possible, however, to only enter your passphrase once per session. Setting this up should be as simple as doing the following:

Excellent! That should be it. Now you should be able to push, pull all you want without having to insert your passphrase more than once per session.

So I found this amazing post that has helped me a ton:

I am constantly referring to that post in order to get the correct commands for launching something (like ManStu) as a domain user.

So, I figured I would post the command here just in case that post goes away (as posts on the internet tend to do).

When using IISExpress to develop a Website project it is nice to have a specific machine name and port to refer to.

You can specify the machine name and port by editing the binding in the IISExpress applicationhost.config file. The following information was gleaned from this answer on StackOverflow.

I actually specified my machine name as well as the local domain.

This seems to be working just fine for me. If you are wanting to actually share that url for others to access (maybe within your own work network) you might have to run this in a administrator command prompt as specified in this StackOverflow answer: